Award Given to Sally Watters

At the SOLF Board of Trustees meeting of June 18, 2013,  Sally Watters finished her term as Southborough Open Land Foundation (“SOLF”) president, which she held since 2007.

The highlight of Sally’s term was that of SOLF receiving a 56-acre parcel of land in 2008 from Elaine and the late Phil Beals, longtime Southborough residents and area civic leaders. Then with help from the U.S. Department of Agriculture and many volunteers, Sally and other SOLF trustees turned a section of Beals Preserve into an “early succession habitat to promote biodiversity for at-risk species. Since 2009, SOLF has also hosted many passive recreation and nature seminars at this beautiful property for the community’s benefit.

Sally and husband Jed moved to Southborough in 1976. They are parents of two daughters, both graduates of Algonquin and St. Lawrence. Rebecca also received a degree from the Yale School of Forestry and Environmental Science and has done environmental work in Mongolia and Cambodia. She presently works for a conservation organization in Jackson, WY. Amanda works as an editor for science textbooks, enjoys nature photography, and is an elite runner.

To recognize Sally’s many civic contributions, Southborough’s Board of Selectmen designated  June 18, 2013,  as Sally B. Watters “Day of Honor.” Congratulations Sally. 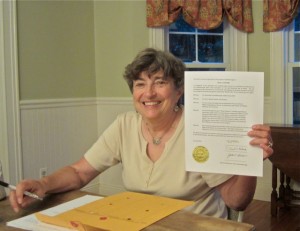 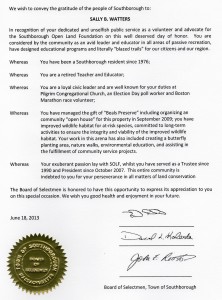