Elaine Beals was among the founding members of the Southborough Open Land Foundation. She served on the Board of Trustees of SOLF, including holding the position of treasurer for many years. She was dedicated to the preservation of the environment and open space, reinforcing her conservation ethic as a member of the Town of Southborough’s Open Space Preservation Commission. In the 1950s and 60s, Elaine and her husband Philip purchased 190 acres of land abutting their farm to protect it from development. All of that land is now under permanent conservation restrictions. Fifty-six acres of it was gifted to SOLF in 2009, property that is now known as the Elaine and Philip Beals Preserve.  In her honor, SOLF presents the Elaine Beals Conservation Award each year to a local resident who has shown outstanding leadership in environmental conservation. The first Elaine Beals Award was presented to Elaine on the occasion of her retirement from the Board of Trustees of SOLF. 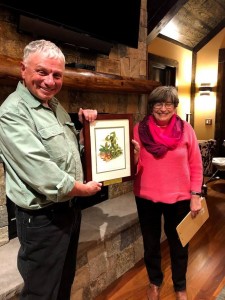 Carl Guyer, at a December 12, 2018  SOLF meeting, receives the annual Elaine Beals award from trustee Sally Watters for his leadership in environmental conservation and awareness.  Elaine Beals was among the founding members of the Southborough Open Land Foundation. She served on the Board of Trustees of SOLF for many years. She was dedicated to the preservation of the environment and open space, reinforcing her conservation ethic as a member of the Town of Southborough’s Open Space Preservation Commission. In her honor, SOLF presents the Elaine Beals Conservation Award each year to a local resident who has shown outstanding leadership in environmental conservation.

The Elaine Beals Conservation Award is presented annually by SOLF  to a person who has worked to help protect the our environment.  It was created in 2005 to honor Elaine Beals for her many contributions to conservation and the protection of the environment in Southborough and the region.  This year the Southborough Open Land Foundation chose Christa Brady and the group she headed, the Friends of the Burnett-Garfield House, as the recipient of this award.  The work done by Christa and the Friends group was essential in helping educate the public about the legacy of the Burnett family to the town of Southborough and the significance of the property at 84 Main Street. By helping preserve the property, Christa helped save an historical building of significance to the town. Of equal importance, she helped conserve a five-acre piece of property threatened with subdivision that borders state protected land abutting the reservoir. Although small in area, the conserved property is of great historical significance, provides a lovely viewscape, and keeps intact a parcel of land abutting other conservation property.

In conjunction with this year’s Elaine Beals Conservation Award, the Southborough Open Land Foundation is also presenting plaques to two students in recognition of their leadership in the fight to save the Burnett-Garfield Property. When the Burnett-Garfield House at 84 Main Street was facing imminent destruction in the summer of 2014, Bridget Brady and Jen Fox began a protest at the property. Whereas many other people joined them either at the protest or by signing the petition they initiated, Bridget and Jen are the ones who spearheaded the movement to save the house. Without their leadership and passion to save the house, the historic buildings might well have been demolished, and the property subdivided.

At its annual meeting on May 27, 2015, the Southborough Open Land Foundation presented the eleventh annual Elaine Beals Conservation Award to Representive  Carolyn Dykema in recognition of her work on behalf of environmental protection.  Ms. Dykema worked as an environmental consultant before becoming involved in local and state politics.  She has served in the Massachusetts legislature since 2008and  has sponsored several bills dealing with water management and the protection of clean water.  She has filed bills to encourage small farms and fisheries and has been a spokesperson for the protection open space.  Recognizing the crisis concerning bees, she recently filed a bill to protect pollinators in Massachusetts. Ms Dykema lives in Holliston with her husband and three children.  As the state representative of the 8th Middlesex District, she represents Southborough, Hopkinton, Holliston, and precinct 2 of Westborough in the Massachusetts House of Representatives. 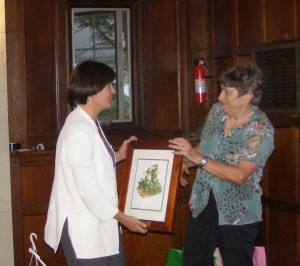 It is a pleasure to announce that the Southborough Open Land Foundation has chosen Elizabeth Meyer as the recipient of the 2014 Elaine Beals Conservation Award.

Betty and her husband Bernie have lived in Southborough for 46 years. During that time, in addition to raising four children, Betty has been very active within the community. At SOLF we of course focus on her dedication to environmental issues. Betty served on the board of SOLF for 24 years before stepping aside last year. For several of those years she was the clerk for SOLF, diligently taking and writing up the minutes, and sending out acknowledgments for contributions that we received. In 2005, she tirelessly helped with the education efforts in town as to why we should buy the Conservation Restriction on Chestnut Hill Farm, a campaign that succeeded at the January 2006 Special Town Meeting that voted overwhelmingly to purchase the Conservation Restriction in order to protect the beautiful Chestnut Hill Farm property from development. Last year before SOLF’s 25th anniversary celebration, Betty approached numerous businesses convincing them to donate goods and services for the silent auction. She has worked as a volunteer at the New England Wildflower Society. Betty also served on the Southborough Opportunity Partnership Committee (SHOPC) committee trying to find ways to bring affordable housing to Southborough. She was very active with the Friends of the Library for many years. In retirement Betty and Bernie are traveling and enjoy spending time at their other home in Stowe, Vermont. The award was presented to Betty on October 18th at a gathering at the home of Attila Herczeg and his wife Susanne Healy. The purpose of the gathering was not only to honor Betty, but also to recognize the efforts of the numerous volunteers who took part in the six month long herpetological study that was conducted at Beals Preserve.

The Elaine Beals Conservation Award was presented to Rhonda Russian at the annual meeting of SOLF on May 7, 2013. The award was given to Rhonda  for her 22 years of service on the Southborough Conservation Commission and her work as an attorney for the Massachusetts Department of Environmental Protection. State Representative Carolyn Dykema also presented a proclamation of appreciation on behalf of the Massachusetts House of Representatives. The Elaine Beals  Award is presented annually by SOLF  to a person who has worked to help protect the environment in Southborough. Rhonda is shown receiving the award from Elaine Beals, and with State Representative Carolyn Dykema and SOLF President Sally Watters. 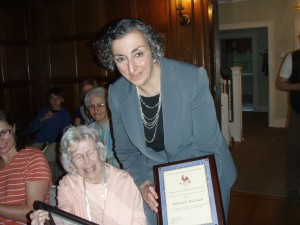 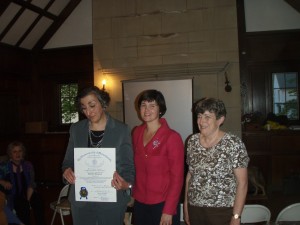 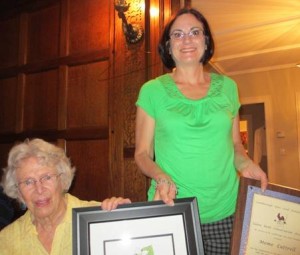 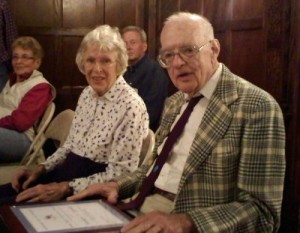