The Annual Meeting of SOLF  featuring a presentation  by Dr. Thomas French from  Massachusetts Fish and Widlife was held May 7, 2014 at the Southborough Community House.

Dr. French,  Assistant Director  for the Department of Fish and Game’s (DFG) Natural Heritage Program spoke  on the History of  Wildlife Conservation  and Recovery in Massachusetts, from the overabundance of wildlife encountered by our earliest settlers to the endangerment of many species because of the loss of woodlands and over hunting in the 18th and 19th centuries. He also discussed recent and projected changes to the suburban wildlife of our region, including the increased sightings of bear and moose. Dr. French has graciously shared his presentation with us and you can download it here as a pdf file (7.3 mb).

It was also announced that the Elaine Beals Conservation Award was presented to Betty Meyer. Because Betty was unable to be at the meeting to receive the award, it will be presented at a ceremony later in the year. This award is presented annually by SOLF  to a person who has worked to help protect the environment in Southborough. Betty, a 23 year member of the Board of Trustees of SOLF was honored for her contributions to SOLF and the preservation of open land in Southborough. 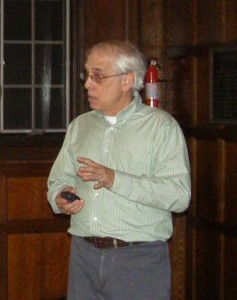